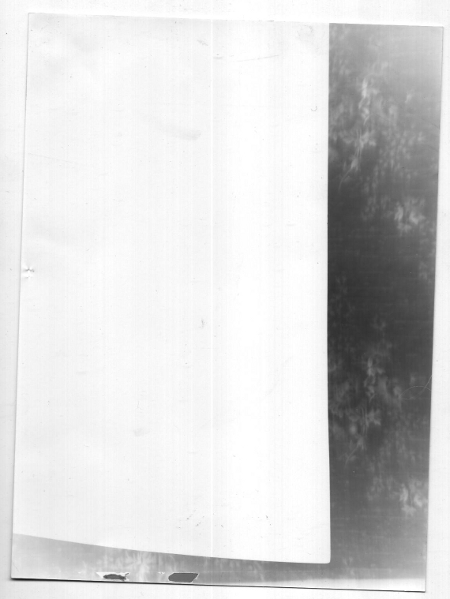 They destroy the clumsy tools of their crime; they hide away the knife, the bludgeon; they sop up the blood, they throw it the jemmy, the dead man, the suffocated poor infant, into the ditch, the pool- and they leave intact the odic negative, the photograph of their sin, the thought thing in the air! He would tap his yellow brow significantly.

Here upon this sensitive sensitive plate I reproduce it, the hanging evidence! The headless child is buried in the garden, but the thought of the beheader is left to lie about. I pick it up.(..) What an art is the art of the odic photograph.

My latest experiments playfully try to reveal the odic fingerprint in reference to the above quoted odic negative: Long time observations through the pin eye of my newly built camera and direct exposures onto/off the surrounding atmosphere made visible through smoke, steam, condensing water, fire and ice.

Above is one of the first results. A 45 minutes recording of boiling water, patiently condensing and water brushing its tiny drops into the air.

Unfortunately, an uninvited guest has set himself just in front of the film holder and covered 3/4 of the image. I will never know what is hiding behind it. Still, the visible result is intriguing. I am looking forward to publish further airy experiments and their respective results soon!