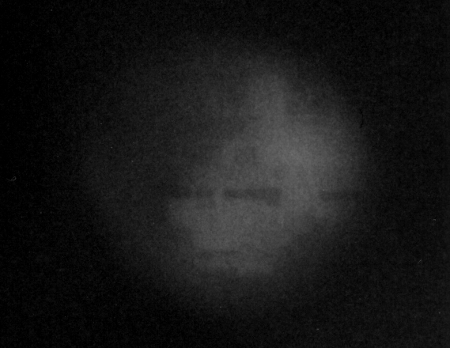 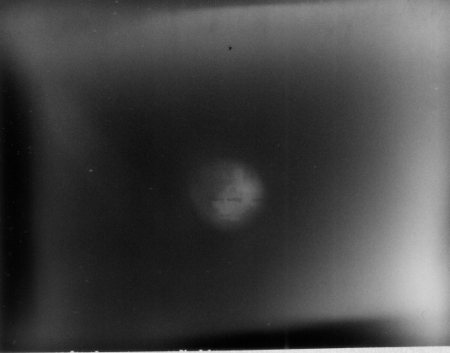 As I already mentionned in an earlier post, i have now started to use light in my thoughtographic experiments as a carrier for thoughtographic exposure. The invisible fluid might expose itself through the very light, that i have been striclty excluding and banning in former thoughts and experiments, concerned that the light might be too powerful to overexpose the fragile fluidum. But now, this is exactly the new starting point of another hypothesis: The Fluidum uses light as a carrier to reveal itself in the very exposure.

Microscopically zooming into the image may expose the oh so invisible creature of thought.

This is the result – a close up (unfortunately not yet microscopically) and beyond also the entire image – of a selfportrait (sitting time about 10 minutes, Fuji FP 3000 instant film) with a Spymirror-InstantImage-Pinhole-VHSBox-Kamera.
A VHS Box is used as a camera obscura and carrier of the instant image filmholder. The Pinhole, piercing the VHS Box, is covered by a small spy mirror (10 x 6 cm) that i kindly got as a free sample from Glaserei Kater, Hannover. The focal lenght of course is very short, just like the thickness of the VHS Box. 1 or 2 cm.

While the sitter watches him or herself in the mirror, the mirror absorbes the image and burns it onto the photographic paper. Spy mirrors are half transparent glas mirrors; from a darkroom (in this case the camera obscura) the spy (camera obscura) can see through the mirror like through a window, whereas the other side (the sitter) cannot see anything but the own reflection.